Brett Vale have had a magnificent season in the Suffolk Women’s League, carrying off the Premier Division title and earning a place in the Eastern Region League.

The club was formed in 2018 by Andy Parton, who is Manager as well as Chairman, and Carl Bennett who is the Vice Chairman as well as Assistant Manager, with Matt Clarke as Assistant Coach.

“We entered the season with an immediate problem,” Andy Parton told Women’s Soccer Scene. “We lost two of our strikers, one due to work relocation and the other, Tarnya McKew who dislocated her ankle in our final pre-season friendly.

“A quick signing thanks to our Recruitment and Development Manager, Danni Lynch, of former Ipswich Wanderers and Needham market striker Laura Tuley solved the problem and she quickly formed a partnership with Stacey Teager up top, both netting in our opening match victory  of the season away to Brantham Athletic.

“If any match set the scene for us and gave us the belief that this could be our season, it was our second match of the season away to Needham Market Reserves. Always tough opposition on their 3G pitch and bolstered by several first teamers as they did not have a fixture, it was going to be a big ask to get a result. Early pressure in the second half led to a a Stacey Teager opener. Needham Market strengthened on the pitch and swiftly drew level. The match was evenly matched and on 75 minutes a ball through the centre was left by the Needham defence, arms raised as they had noticed Stacey Teager in an offside position, but a quick thinking Amy Chippendale sprinted from midfield collected the ball, rounded the first team goalkeeper and slammed the ball home.

“January started badly with Danni Lynch, our experienced rock at the back, ruled out for the rest of the season with a serious knee injury picked up at training. Sadly we also had to say goodbye to our stalwart left back, Shez Nokes who relocated to Australia for work.

“February saw the return of of our experienced goalscorer Tarnya McKew, who got straight to work scoring twice, in our 4:1 home win against Woodbridge.

“Seven matches of the 12 completed and we needed just three wins to secure the league and further bad news came for the team, our goalkeeper Ellie Bird was ruled out for the remainder of the season. Despite having to play outfield players we secured two wins against a young and upcoming Stowupland Falcons side and an away win against Woodbridge which meant that we could celebrate being the first winners of the SGWFL Premier League trophy. Not only that, our first clean sheet of the season came against Woodbridge, Amie Chippendale taking the gloves that day.

“Some key performers for the season have been Kirby King, who commanded the central defence and her pace and courageous performances has been so valuable. Amy Parton - despite being based in Brighton at university has managed to travel back and play in seven of the 12 league fixtures. Claire Turnbull, a true captain, offering leadership and never ending energy, Stacey Teager, our top goalscorer with 14 goals, Laura Tuley with seven goals and adapting to play in midfield although usually a striker, and Chloe Wilson, six goals from midfield.”

Off the field, Andy Parton and Carl Bennett work tirelessly to run the club, obtaining grants and sponsorships which has allowed players to play for very low fees which has helped players following the Covid pandemic.

“We are now planning for next season and beyond,” added Parton. “We now have the opportunity to take promotion to the Eastern Region League and we are also considering whether we can start a reserves side which would then enter the SGWFL Championship. Or for our first team to remain in the SGWFL Premier Division and to defend our title. To do this we need to recruit players to strengthen our first team and also players to form the reserves team.” 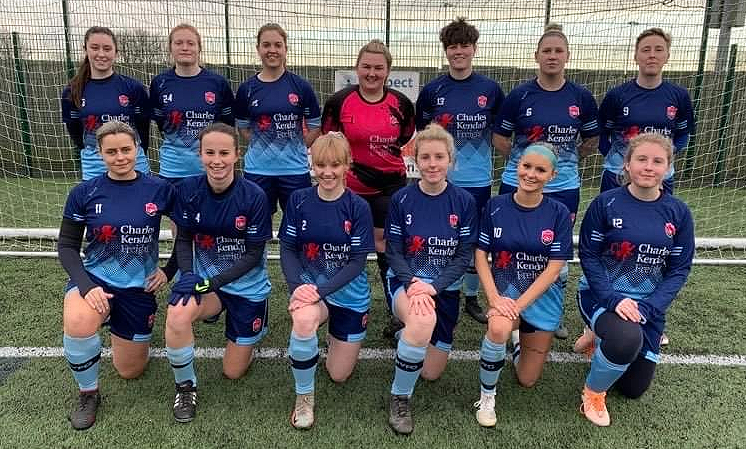