Bromley FC Ladies are the Champions of the Greater London League Premier Division after an outstanding season, making them a title winning side for the second year running.

With five new squad members for the season, Bromley started off well but Cup duties restricted their league games to just three by the end of October.

The highlight of their cup matches was a 2-0 victory over London & South East League opponents Hastings United in the Third Round Qualifying of the Vitality Women’s FA Cup. The tie was played at Hayes Lane with over 500 fans attending.

Bromley remained undefeated until February but, after suffering their first league defeat (to Clapton Community) in three seasons, they bounced back strongly to win their last seven league games.

Bromley are managed by Steve Payne with David Pointing as coach, and Charlotte Lee as captain. “Steve deserves a special mention as he has been a dedicated manager for eight seasons, whose will to win and attitude drives the whole club forward,” explained David Pointing. “He arranges sponsorship, liaises with Bromley FC and so much more. Steve never misses a game and deserves all the success we have achieved over the last three seasons. A Bromley Ladies legend.”

One of their highlights of the season came in October with a 3-2 away victory at Islington Borough, with a last minute winner against the team who ultimately finish second in the league. The victory was achieved in tough conditions and travelling across London, missing several members of the match day squad.

Also, the last game of the season, a 2-0 home victory against Comets, which was followed by the presentation of the league winners’ trophy and medals post-game on the stadium pitch with fans, families and friends joining in the celebrations.

Terri-Ann Warren was leading scorer with 16 goals, whilst Jade Davenport and Charlotte Lee both reached double figures, but Pointing insists that winning the title was a complete team effort: “Scoring 61 goals and only conceding 11 times in 16 games is a massive effort from the whole squad.” 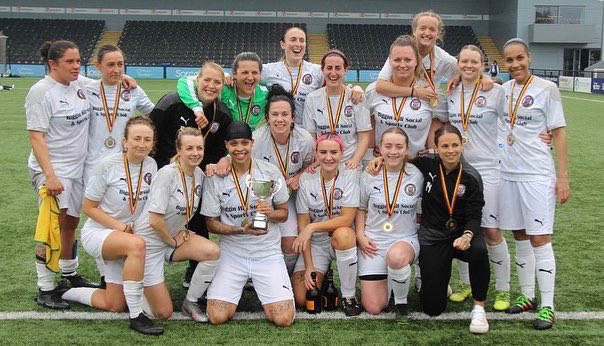