Trinity back with a bang

Gainsborough Trinity have been playing their first season since being brought back from a dormant period where the club had no women’s team, and it proved to be a successful one as they won the Lincolnshire County Women’s League.

Gainsborough started the season quickly with four straight wins and although their fifth game ended in defeat at Skegness Town, it proved to be only a minor setback. They duly won all of their thirteen remaining matches, starting with a 2-0 win away to Lincoln United Development, who ended up three points behind them in second place.

The team is managed by Ewan Chesman, with David Ede as his assistant and Tom Renshaw and Marc Priestley in the role of Goalkeeper Coach and Sports Therapist respectively.

Chloe Gray, formerly of Lincoln City, is captain at the age of 20 and Lauren Crellin topped the scoring charts with a total of 26 goals. There were other major contributors in terms of goals as Emily Murphy added a further 20, Izzy Anderson netted 16 times and Harriet Hill (14), Amy O’Brien (13) and Alice Hill (12) were also amongst the goals.

One of the most important results of the season came when Gainsborough won 5-0 against Ruston Sports, who were third in the table and proved a big point to show the league title was coming their way. They also beat runners-up Lincoln United Development in both games, 4-2 and 2-0, whilst their best performance of the season came against Skegness Town, beating them 5-0 to avenge their earlier defeat.

Gainsborough rounded off an excellent season by lifting the League Cup after winning 5-0 against Louth Old Boys in the Final. Amy O’Brien scored two of the goals and the others came from Kasie Coyle, Emily Murphy and Harriet Hill.

Since the end of the season, Gainsborough Trinity have learned that they have won promotion to the East Midlands League and will play in Division One North next season. 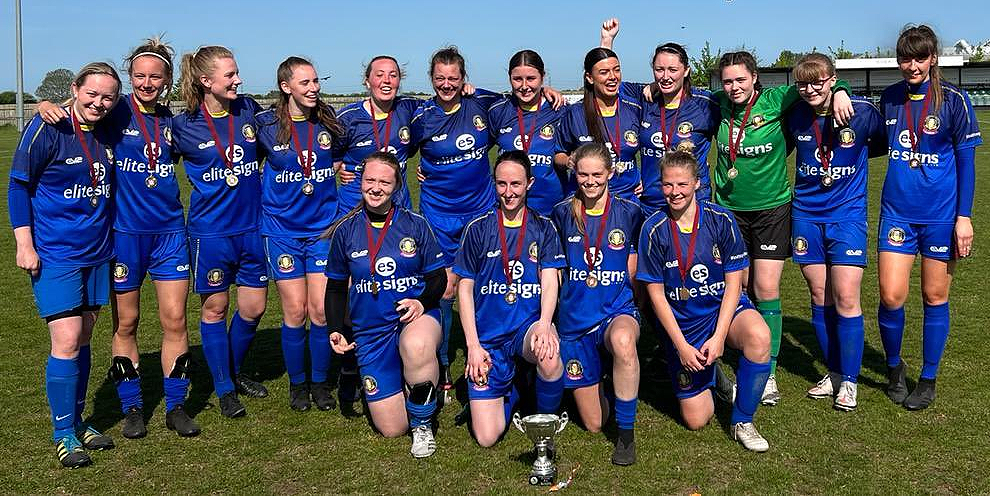